My phone rang at 8am and it was the Zuni Post Office letting me know they had my queen bees. The people at the post office are great and always let me know when my bees arrive. By 8:15 I had picked up the bees and headed home.

The weather in Virginia has been terrible this spring. It finally warmed up and the bees were working hard. Then bam. We are right in the middle of a cold spell with freezing temps expected for the next few nights. After today there will be nothing but cold rain for the next few days. I’m going to have to make the splits and put the queen cages in today.  I would prefer to make the splits and leave them queenless for a day then put the queen cages in but the weather is not going to cooperate. I sure hope the hives accept the queens and don’t ball them.

A little after 1:30 pm the temps had reached 56 degrees. That’s about the best it was going to get so I began making the splits. To build the three splits I used my strongest hive that had three hive bodies full of brood. I made three splits off that hive!  I used the second strongest hive for the fourth split.

The nucs have five frames |1|2|3|4|5|. In position 1 I put a frame of honey, position 2, 3 and 4 I put frames of capped brood, and position 5 I put a frame of pollen. I then added the queen cages between frames 2 and 3. The candy was already half gone so the queens would be out very quick. Once I got the frames in I shook some extra bees in each box, added the queen cage and closed the hive. I blocked the entrance with screen so the bees can’t leave. I put all the nucs in the garage and will take them out in three days. This should prevent the bees from flying back to their original hives.

It was a long day but I got the four splits done and have them in the garage to try to help keep them warmer during the freezing temps. 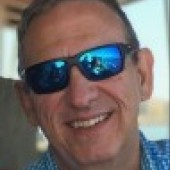 Jay's goal is to build a retirement oasis that includes an 8,000 gallon Koi pond, swimming pool, pizza oven, and best of all, a full bar and game room! Follow his adventures in getting ready for an active, fun retirement with his kids and grandkids.